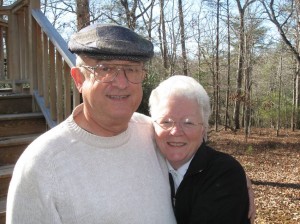 After careers in mechanical engineering and nursing, John and Joy Moss retired to Northeast Georgia in 1997. Woodworking had been an occasional hobby throughout John’s life, but after retirement he joined the American Association of Woodturners and three local clubs. With significant more time available, the occasional hobby soon became a serious pursuit. He furthered his knowledge of wood turning under expert wood turners such as Nick Cook, Gary Sanders, Cliff Lounsbury, Doug Barnes, and Mark St. Leger. After attending many symposia and club demonstrations, and refining his skills in his home workshop, John began mentoring other woodturners. It wasn’t long before he found himself an instructor in his own right. His precision, analytical skills, and perfectionist tendencies, make for beautifully turned pieces. John loves to share his passion for creating beautiful and yet functional pieces which makes him an excellent teacher. 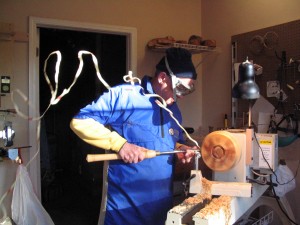 At the present time, John is no longer turning due to medical issues. When he was turning, John turned mainly functional items, but was receptive to any suggestions which may be turned on his lathe. Later, turning tapestry bobbins consumed the majority of his time, but he also turned many other items for sale at art and craft shows and for five galleries and gift shops in Georgia and other states. He occasionally used exotic woods, but his preference was to use domestic woods found locally that had been cut for other reasons. He did not embellish the wood in any way. He felt that the character of the wood itself makes for the beauty of the turning.

For Joy, having a husband who is a talented wood turner is a big asset. However, unlike John, wood turning was not one of Joy’s hobbies until relatively recently. After a career as a registered nurse, raising four children, running two home-based businesses, and pursuing an assortment of other craft-based hobbies, Joy discovered the pleasure of woodturning in 2004 at a local weekend class. This led to additional classes at John C. Campbell Folk School, where she has been instructed by Frank Penta, Alan Leland, Nick Cook, Dale Nish, Andi Wolfe, and Sister Judy Yunker. Fellow woodturners and demonstrators at local clubs and various symposia have provided her with a wealth of ideas and techniques.

Joy has been inspired by many outstanding wood turners, including Andi Wolfe, Dixie Biggs and especially Bonnie Klein. Whereas John has tended to create larger and more functional pieces, Joy enjoys creating small, fun pieces like jewelry and spinning tops. While John loves to seek out wood that has character to be released in the process of turning, Joy takes pride in taking wood that is bland and unremarkable and embellishing it with color, burning, piercing, and texturing.

Due to Joy’s love of her miniature hobby, she enjoys turning miniatures to use in miniature room boxes, dollhouses, or for displays. Creating custom items for others also gives her the greatest pleasure.

John and Joy now live in Easley, South Carolina to be closer to their family. They are enjoying turning in their new woodworking studio and laughing with their kids, grandkids, and great-grandkids. Today, Joy does 10-14 craft shows each year and turns the tapestry bobbins, the business that John started 18 years ago.